John the Baptist: Pointing to Jesus

Tony was excited about his sermon. It was his turn to preach to his seminary class and he was ready. His points were clear and insightful, his illustrations were perfect, his timing and delivery were masterful. Everything came together perfectly, and Tony was excited to read his professor's feedback. What he found changed his perspective entirely. “Tony. You can’t convince people that you are wonderful and that Jesus is wonderful in the same sermon.” John the Baptist shows us what it looks like to live in a way that makes Jesus look wonderful. Study Mark 1:2-11 to learn how he pointed to Jesus and to be challenged by his example of humility.

Pray that the Lord will open your understanding and give you wisdom from His Word. Ask Him to help you live what you learn.

Read Mark 1:2-11 and notice which two people feature in this part of the story.

Read Mark 1:1 to gain a little more context for today's passage and its focus.

Which two people are the main characters in today's story?

Who are verses 2-3 quoting according to the beginning of verse 2?

What do verses 2-3 tell us about this messenger?

What was John doing, according to verse 4, and where was he doing it?

What was the response to John according to verse 5?

What did John wear and eat according to verse 6?

According to verses 7-8, who was John's preaching about?

Where did Jesus come from according to verse 9?

What did Jesus come to John for in verse 9?

What happened when Jesus came up out of the water?

What did God say about Jesus in verse 11?

Since John is identified as a messenger who spoke, use this marking to help you see each time he's mentioned in today's passage.

Just as in the first verse of this chapter, mark each Name of Christ and each reference to Him.

Mark each of the times Jesus is named or mentioned in Mark 1:2-11.

The story of John the Baptist starts back in the Old Testament when God told His people He would send a messenger who would tell them that Messiah was coming. See this in Isaiah 40:3-5 which is the passage quoted in Mark. 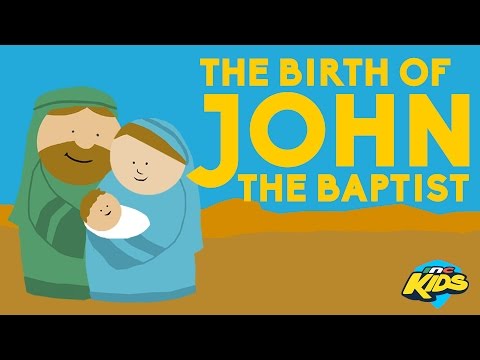 In Luke 1:65-80 we read the reaction to John's birth and the words of prophesy his father spoke explaining his purpose and mission.

Luke 1:41-44 tells us that John was filled with the Holy Spirit before he was even born.

How would you tell the story of John's birth and early life to a child?

Why is John the Baptist important enough for God to write so much about him in the Bible? (Hint: what was he supposed to do?)

Luke 3:1-6 tells us about the beginning of John's public ministry. Notice how carefully God establishes that this is a real historical event. Also consider how much emphasis it puts on who commissioned and sent John.

On whose authority did John begin his ministry?

Matthew 3:1-6 speaks of John's ministry like today's passage does.

Look a little more closely at the word translated repentance in today's passage.

Notice who needs to repent according to the Lord Jesus in Luke 5:32.

Romans 3:23 tells us which of us fall into that category.

Romans 2:4 tells us what should lead us to repentance.

2 Corinthians 7:9-11 shows the contrast between worthless, worldly sorrow over the consequences of sin and godly sorrow that leads to repentance as shown by a changed life.

What do these verses tell us about repentance?

Take a closer look at the word translated baptize in today's passage.

Acts 19:4-5 explains the baptism of John the Baptist and that it was replaced by baptism in Jesus' Name.

This short article explains more about John's baptism and the differences and similarities between it and Christian baptism after Jesus died and rose again.

Based on these verses and the summaries of other verses in the article, what was the significance of John's baptism? (Hint: it had to do with the same thing as John's preaching - getting ready for someone.)

John wore rough, inexpensive clothes for several reasons. One was to identify with the prophets - especially Elijah in whose spirit the prophets said John would come. Notice what 2 Kings 1:8 says about Elijah's appearance.

Several times in His Word, God warns His people about putting too much emphasis on what they wear. Luke 12:15 tells why.

Even John's diet was simple and inexpensive. Notice in Leviticus 11:21-22 that locusts were one of the things Israelites were allowed to eat.

Obviously what John wore and ate has some significance since God points it out. What are some things we can learn about John from what the Bible says he wore?

Who did John's followers go to when John was dead?

What does this tell us about John's life and message?

We see that John pointing his followers to Jesus started all the way back near the beginning of his ministry. Read John 1:6-8 and 19-37 and try to understand the kind of man these verses describe.

Read John 3:26-36 and see how this same attitude continued throughout John's life.

What did John say about himself?

What did John say about Jesus?

What did John say about his own relationship to Jesus?

How did John say we should respond to Jesus?

What kinds of words describe John the Baptist?

Luke 7:19-28 tells us the fascinating story of John making sure Jesus was the promised Messiah and shows us Jesus' perspective on John's life and role.

What did Jesus say about John the Baptist?

1 Peter 5:5-7 gives us insight into why God exalted John.

Why did God exalt John?

Matthew 3:13-17 tells us about the greatest honor of John's life.

If you have questions about why Jesus was baptized, this article gives some biblical answers.

Mark 9:7 tells of another time that God said something very similar to what He said after Jesus was baptized.

In John 3:35 we read again about the Father's love for the Son.

How much must God the Father love the Son?

How to Please Him

In today's passage we saw that Jesus pleased the Father. 1 Thessalonians 4:1-12 tells us how Christians can please God through Jesus Christ.

Hebrews 11:6 tells us what must come first before we can do anything to please God.

How can a person please God?

We see the interaction between the members of the God-head in today's passage. We see this again as Jesus speaks in John 15:26.

2 Corinthians 13:14 also names each of the members of the Trinity working together.

We see how they work together in salvation in 1 Peter 1:1-2.

What are some of the things these verses say about the roles and unity of the members of the Trinity?

Read Mark 1:2-11 again in light of everything you've seen from God's Word.

What was the clear message of John's life? Did that align with God's purpose for him? How do you know?

You've seen that repentance prepares people to believe in Jesus Christ. Have you repented of your sin and trusted in Him? If so, do you continue repenting of sin and turning to Him?

How has John the Baptist's example of humility challenged you? How will you strive for humility that exalts Jesus today?

Though in a slightly different way than John, if you are a Christian your life is about pointing to Jesus, too. How can John's example encourage you to live pointing to Jesus? How can you grow in that this week?

We hope this study has helped you understand John the Baptist better and has challenged you to live in humility pointing to Jesus.

Please take a brief moment to provide us some feedback on this lesson. We're always striving to improve, and, with your help, we will.

Please join us in our quest to help the world discover the beauty of the Bible. Consider making a generous donation today.